How Does SSH Tunneling Work?

Think of your SSH connections as tubes. Big tubes. Normally, you'll reach through these tubes to run a shell on a remote computer. The shell runs in a virtual terminal (tty). But you know this part already.

Think of your tunnel as a tube within a tube. You still have the big SSH connection, but the -L or -R option lets you set up a smaller tube inside it.

Every tube has a beginning and an end. The big tube, your SSH connection, started with your SSH client and ends up at the SSH server you connected to. All the smaller tubes have the same endpoints, except that the role of "start" or "end" is determined by whether you used -L or -R (respectively) to create them.

(You haven't said, but I'm going to assume that the "remote" machine you've mentioned, the one behind the firewall, can access the Internet using Network Address Translation (NAT). This is kind of important, so please correct this assumption if it is false.) 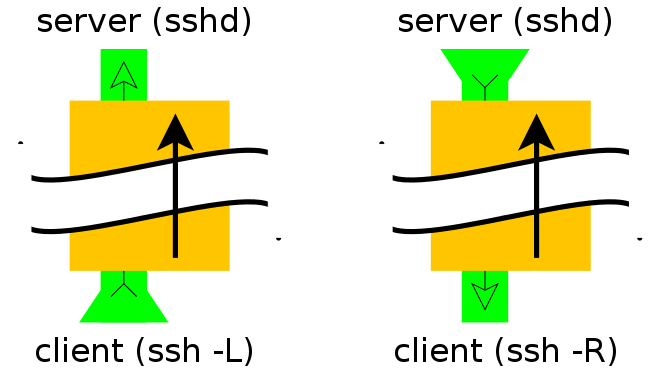 So... To be able to SSH from the Internet into a machine behind a firewall, you need the machine in question to open an SSH connection to the outside world and include a -R tunnel whose "entry" point is the "remote" side of his connection.

Of the two models shown above, you want the one on the right.

From the firewalled host:

This tells your client to establish a tunnel with a -Remote entry point. Anything that attaches to port 22222 on the far end of the tunnel will actually reach "localhost port 22", where "localhost" is from the perspective of the exit point of the tunnel (i.e. your ssh client).

The other options are:

There will be a password challenge unless you have set up DSA or RSA keys for a passwordless login.

Note that it is STRONGLY recommended that you use a throw-away account (not your own login) that you set up for just this tunnel/customer/server.

Now, from your shell on yourpublichost, establish a connection to the firewalled host through the tunnel:

You'll get a host key challenge, as you've probably never hit this host before. Then you'll get a password challenge for the username account (unless you've set up keys for passwordless login).

If you're going to be accessing this host on a regular basis, you can also simplify access by adding a few lines to your ~/.ssh/config file: